The Octopus 600 covers all your essential perimetry needs in an easy-to-use device: central field static testing, rapid screening, a easy-to-read analysis software and the ability to network it with integrated EyeSuite softwere. The Octopus 600 performs standard white-on-white threshold testing in just 2–4 minutes in the central visual field. The Octopus 600 offers the most commonly used static tests.

CENTRAL FIELD STATIC PERIMETRY
The Octopus 600 performs standard white-on-white threshold testing in just 2–4 minutes in the central visual field. With its comprehensive test library for central tests including G, 32, 30-2, 24-2, M, and 10-2 and its flexible printouts both in Octopus and HFA-format it covers your essential clinical needs.

STANDARD TEST LIBRARY
The Octopus 600 offers the most commonly used static tests. For central field testing there are the physiology-based G-patterns following the retinal nerve fibers and the 32, 30-2 and 24-2 patterns. For the macula, there are the physiology-based M pattern and the 10-2 pattern. With the fast TOP strategy, full threshold testing can be completed in just 2-4 minutes.

SCREENING TEST – Fast screening
Use your Octopus 600 as a fast screening device and quickly distinguish between normal and abnormal visual fields. Screening can be performed with both standard white-on-white or the patient-friendly Pulsar perimetry designed for early glaucoma detection.

GLAUCOMA SCREENING TEST GST – Less than one minute
Use the new Glaucoma Screening Test GST to distinguish between normal and abnormal visual fields in less than one minute. The test is purely qualitative and distinguishes between normal and abnormal visual fields by presenting stimuli three times at a brightness that patients with normal vision should see. If not seen, then the visual field is flagged as abnormal with high reliability and the patient can be further tested. Because the test is efficient, it opens doors for more routine visual field testing to ensure no pathology goes undetected.

PULSAR STIMULUS – Made easy for patients
A screening test has to be easy to complete by definition. That’s why the patient-friendly Pulsar stimulus is recommended for screening purposes. It has been developed for early glaucoma detection and shows a short learning curve and low test-retest variability.

FIXATION CONTROL – Perimetry you can trust
Enjoy the reliability of Octopus perimeters, for example with Octopus Fixation Control which automatically eliminates fixation losses from your visual field testing. 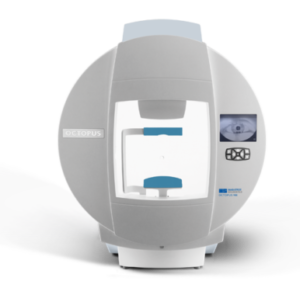 Goldmann Perimetry for the future

Addressing all major perimetry needs, the Octopus 900 is the perimeter of choice for anyone who wants diagnostic flexibility to analyse, assess and track patients’ visual fields. It makes it possible to run standard central and peripheral visual fields with
minimum test duration, seamlessly integrated into your practice environment. This supports high patient throughput and effective practice management. With its built-in reliability features, the Octopus 900 is easy-to-use and delivers results you can trust. 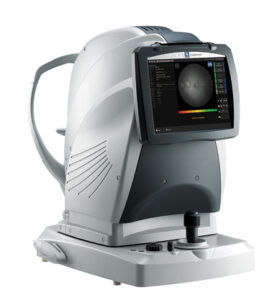 The MP-3 has a wider range of stimulus intensity, from 0 to 34 dB, compared to the MP-1. The MP-3 measures perimetric threshold values, even for normal eyes. A maximum stimulus luminance of 10,000 asb* allows evaluation of low-sensitivity.

The visual rehabilitation mode trains low-vision patients who have lost foveal fixation to relocate their preferred retinal locus (PRL) to a different region, called the trained retinal locus (TRL). The TRL is predetermined by a physician, and fixation rehabilitation allows the patient better functional vision (i.e. reading speed) due to increased fixation stability and visual outcomes.